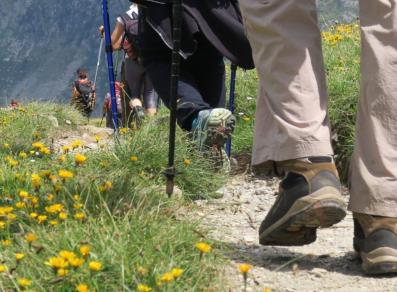 After reaching the neighbourhood of Arpuilles in the Municipality of Aosta, take the road called “dei Salassi” indicated by a signpost and continue to a crossroads located on a hairpin bend, where a sign indicating the “Colonia Città di Collegno” (Collegno settlement town) can be found.

The itinerary runs along the Gran San Bernardo valley, passing indications of the manmade landscape: it flanks the irrigation canal known as “Ru Neuf”, veers along the Roman road of Condemine Testa and continues on via the footpaths of the valley. The path is mainly spread along farm tracks, although there are plenty of fun single track stretches and more gentle asphalt sections.

Leaving the car near the abandoned settlement of the town of Collegno, the Ru Neuf runs towards the north until it reaches the asphalt road. On abandoning the dirt path, you take the road that soon becomes a farm track and leads to a crossroads after passing through a couple of villages; veering to the right, you descend for around a km until you reach the road coming from Planet and leading to a few of the hamlets and mountain pastures above. On reaching this point, start to ascend again, past the Romparmé and Ronc villages where you can stop to fill up your flask and admire the panoramic view over the central valley and the mountains that surround the city of Aosta. Following the road until you reach a signpost of paths indicating the crossroads between the Pointe Chaligne and the Alp Arsy, continue further until reaching a crossroads located on a hairpin bend. Veering to the right you enter a larch wood with a stunning landscape via a grassy path. After widening, the grassy trail is replaced by a steeply sloping farm track. After travelling along this for a few dozen metres, you catch sight of a road on the right that, following the yellow arrow which indicates the path, reaches a little stream. After crossing this, you come out of the wood and go along a path that reaches the stunning Alp Arolla from where you can enjoy a breathtaking view over the Grand Combin and Valpelline. Going beyond this you reach the farm track that comes from the neighbourhood of Buthier and leads to the Alp Chaligne. Here, after a few km, you reach the Chaligne Mountain Hut where you can stop, refresh yourself and sleep, if necessary.
Once again on the excursion, you go back down along a short stretch of the road taken for the ascent until you come to a level farm track that follows the now underground Ru Colet. Ru Collet continues on level ground through the woods and turning around the Tardiva peak reaches the comba d’Arsy (valley) and the pasture of the same name from where you can enjoy a fantastic view over the large opposite valley of Menouves. The exertion is over. A small, slightly sloping road suitable for tractors sets off from the pasture. Following the tractor road and taking care over the water collection ducts, you reach the Roman road of Condemine Gran Testa. Continuing along this road towards the east until you reach the hairpin bend in the road that takes you to Buthier, you will be able to see the milestones with progressive kilometre markers. Continuing on the asphalt, take the crossroads for Petit-Buthier and once the road ends, follow the farm track, turning to the left and crossing the fields until you reach the Moré-Buthier village where the Lo-Cuis farm company is located. Continuing further towards the south, you take the first path on the left that, via a number of spectacular rises and descents in the wood, reaches the ru neuf near an asphalt hairpin bend where there is a signpost indicating the Via Francigena route. After crossing the hairpin bend, you come upon the farm track overlooking the ru that soon re-emerges, running alongside the woody path and indicating a picture postcard landscape. Continuing beyond the climbing centre, you pass a few municipal roads at several points before returning to the point of departure.