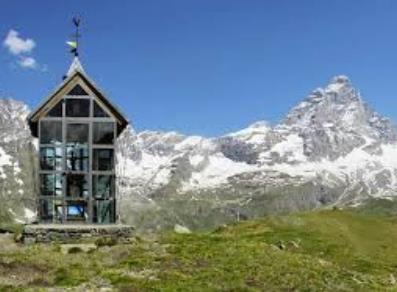 This parish is mentioned for the first time in the papal bull dated 5th April 1145 with which pope Eugene III took the canons of Saint-Gilles di Verrès under his protection.
The parish church of San Vittore is rectangular in shape and has a single nave. The current church dates back to the end of the 15th century or the beginning of the 16th century and was consecrated in 1521. Its construction was financed by the counts of Challant, whose coat of arms may be observed on a keystone above a buttress. The facade was rebuilt in 1670 and has a portico to protect the entrance. The seventeenth century portal in cut and sculpted stone is noteworthy and on the inside, the baroque altars in painted and gilded carved wood, are also interesting. The walnut stalls of the choir may be dated back to the end of the 17th century and bear the coats of arms of many of the noble families from the parish.
With the new direction of the church beginning from the seventeenth century, the bell tower came to find itself behind the apse. Having collapsed in 1755, it was rebuilt in 1762 but it appears to have kept its medieval typology in the lower section.