The Aosta Valley, a land of castles

A journey amidst Aosta Valley's many castles. 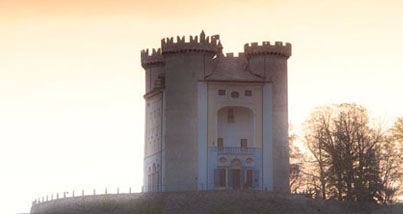 The House of Savoy in the Aosta Valley

Discover the Fort of Bard, the Royal Castle of Sarre and the Savoy Castle in Gressoney-Saint-Jean. 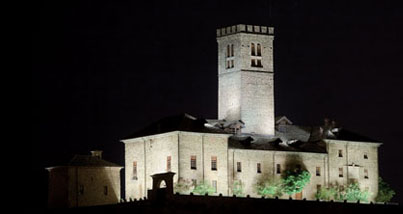 The valley of one hundred castles

Many other castles, towers and fortified houses, even if they cannot be visited inside, are part of the Aosta Valley landscape. 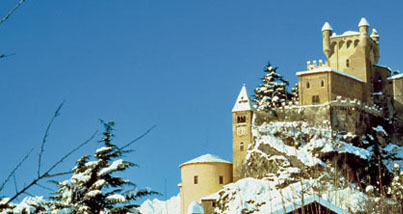 In the Middle Ages, the Aosta Valley was a compulsory passage towards Alpine passes. Thus, toll collections were an important source of power and income. Since the Aosta Valley wasn't directly controlled by any authority, it was easy to take the land and appoint yourself as its lord; therefore, local nobles moved away from the towns, in search of land where they could extend their domains. Castles, towers and fortified houses arose on unaccessible elevations to dominate vast stretches of land from above.

In the Aosta Valley, first castles date back from the beginning of the XI century; often they were built on previous fortified settlements. They consisted in a square tower, or donjon, surrounded by walls. Typical examples of fortifications from the 11th and 12th century are Graines Castle in Brusson, the castle of Cly in Saint-Denis and Châtel-Argent castle in Villeneuve. Their chapels show the extreme simplicity of Romanesque religious architecture.

The evolution of defensive castles into mansions

In the following centuries, castles gets more complex. Residential functions, which were originally distributed in separate buildings, are brought together under one roof, and become more important than defensive functions. It's the case of Ussel castle and Verrès castle.

Late Gothic Fénis castle and Issogne castle complete the evolution of defensive castles of the Aosta Valley into urban mansions.

Savoy Castle stands in Gressoney-Saint-Jean, surrounded by greenery and the colours of a rocky alpine garden. Margherita of Savoy spent her summers there.

The fortress of Bard was an unconquerable nineteenth century barrier fortress. It is now a European cultural centre, with museum and exhibition spaces.

An expression of the metamorphosis of Gothic to Renaissance, Issogne castle holds surprising art treasures.

Elegant features, such as the large staircase with flying buttresses and the mullioned windows in dressed stone, are linked with the essential defence devices.

Ussel castle is an impressive single body defensive castle that seems to emerge from the rock to dominate the Dora valley and the district of Châtillon.

Gamba castle holds the regional collection of modern and contemporary art with over 1,500 works of art presented in 13 rooms of the castle.

Cly castle is one of the oldest castles of the Aosta Valley. The large defensive walls, crowned by gabled Guelph merlons, surround constructions erected between the eleventh and fourteenth centuries.

Towers and crenellated walls that evoke adventure and fairy-tale charm make Fénis castle one of Aosta Valley's most famous.

Sarre castle, the hunting and holiday residence of the House of Savoy, tells about the life of the royal family in the Aosta Valley.

While the near Saint-Pierre castle dominate from above the hill, the castle of Sarriod de La Tour stands among orchards, on a flat area ending in a cliff over the Dora Baltea.

Introd castle with its original polygonal shape, the castle park and the surrounding buildings form an interesting architectural group.