The collegiate church of Sant'Orso and its cloister

Sant'Orso in Aosta is a building complex like no other in the Alpine mountain range. 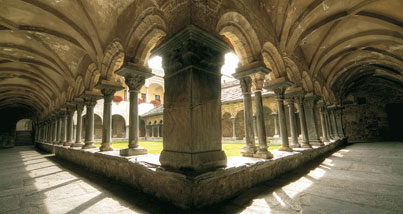 In the collegiate church of Sant'Orso, in Aosta, the splendour of the Ottonian frescoes combines with the architectural rigor. 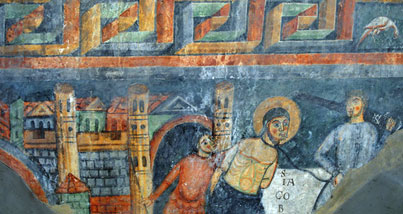 The spirit enclosed by form and matter

In rural churches and chapels the stone encloses and protects the sacredness of the spirit. This is the case in the Romanesque church of San Martino in Arnad (11th Century). 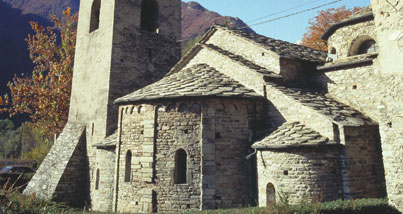 With its terracotta shapes and colours on the cathedral’s façade, the Renaissance makes its entrance in Aosta. 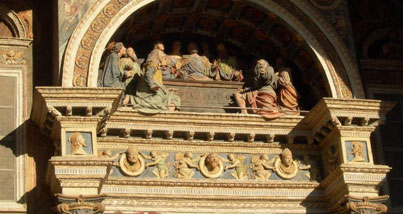 With those of Sant’Orso, the frescoes brought to light in the attic of the cathedral make Aosta one of Europe’s most important centres of Ottonian art. 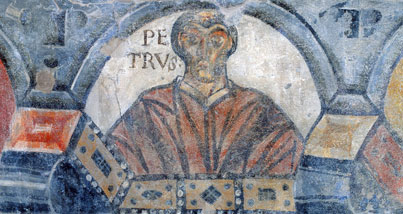 The churches in the Aosta valley have undergone many transformations to adapt to changes in use and taste, and are testimony to many historical-artistic stages, in an overlapping of centuries and styles.

The Early-Christian period: the foundations of Christianity

The remains of Paleochristian buildings (5th to 6th century) attest to the early diffusion of Christianity in the Aosta Valley. The foundations of the Church of San Lorenzo and of the original cathedral can be seen in Aosta.

In the 11th century, Saint Bernard and Saint Anselm make the Aosta Valley a religious centre of European importance along the Via Francigena.

The two religious masterpieces of medieval Aosta take shape: the cathedral and the church of Sant'Orso. Churches, bell towers and rural chapels become a visible and common aspect of the Middle Ages in the Aosta Valley landscape.

Architecture and frescoes, art of prayer

The Late-Medieval religious architecture (13th - 15th centuries) is found in the whole of the Valle d'Aosta: in the reconstruction of the cathedral’s cloister and the remaking of the façade of Sant’Orso in Aosta; in the parish church in Challant-Saint-Victor; in the simple chapel with a Gothic bell tower in Moron; in the International Gothic parish church in Antey-Saint-André; in Santa Maria in Villeneuve; in the bell tower of the parish church of San Maurizio in Sarre.

Sometimes the Medieval period is recognised in details; this is the case of the crypt and the apsis of the church of Saint-Vincent, the vaults made from tuff stone of the 15th century in Sant'Orso church of Derby, the Gothic vaults and the door dating back to the late 1400s in the church of San Martino in Arnad, or the many precious details in the impressive collegiate church of Saint-Gilles in Verrès.

Often, Middle Ages architecture is found in single features. It is the case of: the crypt and the apses of the parish church of Saint-Vincent; the 15thcentury vaults made of tufa stone in the Sant'Orso church of Derby; the late 15th century Gothic vaults and portal in the church of San Martino at Arnad; the many precious details in the impressive Saint Gilles collegiate church at Verrès.

Among the frescoed medieval churches, don't miss: the church of Sant'Ilario at Gignod, whose 15thcentury frescos are among the best in the whole Aosta Valley; the chapel of la Madeleine at Gressan, a simple Romanesque rural church with amazing 15thcentury paintings in its interior and on the façade; the little church of Saint-Solutor at Fleuran (Issogne), whose façade is decorated with frescos ofrom 1424.

Renaissance and baroque: the decoration is sacred

Between the end of the 15thcentury and the first years of the 16thcentury, Georges de Challant, prior of Sant’Orso and great humanist and patron, built the priory of Sant'Orso next to the church. It is a sumptuous palace inspired by the contemporary public buildings of Piedmont and Lombardy. It is a combination of old and new styles: the façade is Renaissance, while other features such as the octagonal tower and the ogives are reminescent of Gothic architecture.

Pure Renaissance style can be found in the façade of the cathedral of Aosta. Its elegant frontage, finished in 1526, is embellished with statues and frescos.

In 1563, with the relocation of the Sabaud capital from Chambéry to Turin, the Aosta Valley became a province of borders, also from an artistic point of view. In the meantime the Counter-Reformation obliged to renovate the churches; however, the difficult economic situation of the Valle d’Aosta did not allow for the construction of new buildings and the renovations were limited to inside where frescoes and amazing baroque altars were added to existing buildings.

The 17thcentury was characterised by a more austere form of Baroque, still conditioned by Gothic essentiality and by Renaissance rigour. The 18thcentury, though, was the golden era of the rococo style: engravings, painted and gilded statues and solomonic columns flourished. This ornamental profusion are found in the façade and in the altar of the parish church of Issime.

Hermitages and sanctuaries, refuges of the soul

Hermitages and sanctuaries built in solitary spots on the slopes of the mountains indicate a return to the more traditional forms of local culture.

Dedicated to a popular, simple and moving religion, the sanctuaries welcome the suggestions of popular devotion: the chance rediscovery of statues of the Madonna and the collection of ex-votos are at the origin of many sanctuaries in the Aosta Valley.

The sanctuary stands in a beautiful position on the road to the Val Veny and with the Brenva glacier in the background.

The ancient Plout Sanctuary dedicated to "Notre Dame du Tout Pouvoir", is a destination of frequent pilgrimages and the object of a well-established popular devotion.

The sanctuary of Madonna della Guardia in Perloz dates back to the 12th century. Inside, the rib vaults were completely frescoed in the 19th century.

The sanctuary dedicated to the Madonna delle Nevi stands between chestnut woods at 696 metres metres above sea level in the Machaby valley (Arnad).

The sacred paths of Aosta 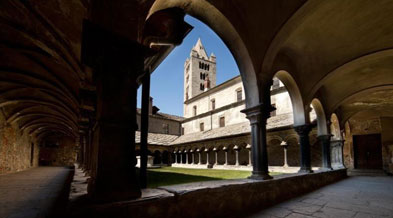 Discover the oldest and most important places of worship of Aosta, meandering along ‘secret’ streets, orchards, gardens and ancient walls…